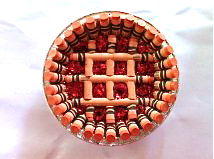 Often associated with his Crayola crayon sculptures, Herb Williams studied at Birmingham Southern College and in 2011 received a grant from the National Endowment from the Arts. “Occupie” the crayon-and-glitter confection in a baking tin pictured here, recalls the infamous Occupy Wall Street protests of 2011. “They are my response to the glitter-bombing of politicians who are claiming that such American wholesome values and symbols are strictly a moral or Christian right.” This sculpture was included in Seed SPACE’s inaugural CSArt bundle in December 2011.

One thought on “Herb Williams”